The 2012 Kia Optima Hybrid has the slogan, "Not your ordinary hybrid midsize sedan". Considering that this is the first time I've ever experienced a hybrid, I can't compare it to others. I wasn't sure what to expect; all I knew was that it is supposed to better with fuel economy. After driving it for a week, I came to realize this was indeed, a far from ordinary car! 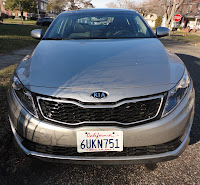 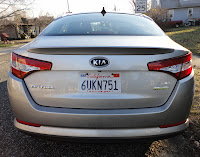 From the 16" tires with alloy wheels, unique grille design and in-glass antenna, this was a cool looking car! I loved the keyless entry and start. As long as the key is in your purse, you can operate the locks and start the car, a VERY welcome feature for everybody, but especially busy moms with full hands and arms! 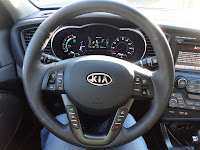 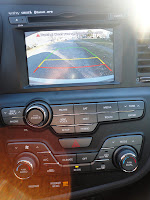 On the inside, the first thing I noticed was the entertainment/GPS console in the middle of the dash. A built-in GPS system is always a nice feature, and the screen also serves as a rear-view camera monitor. This is great for parking lots because you can see around the cars parked beside you, ensuring that it is clear to back up. The Optima Hybrid comes standard with a 6-speaker sound system with dash-mounted tweeters, but this car had the optional Infinity sound system which includes 8 speakers and SiriusXM Radio. If you like to rock out in your car, I highly recommend this option. The sound quality was amazing and satellite radio offers a nice change from played out songs. I also want to mention that you can hook up audio devices like iPods thanks to the built-in USB inputs. 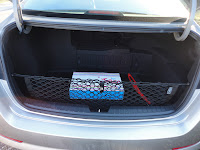 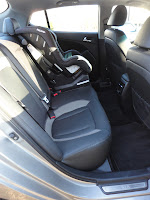 The interior was extremely roomy. I don't know if that's because we drive a small Ford Focus, but my 6'2" hubby had no problem with leg or head room and there was plenty of space between my 2-year-old's car seat and big sister. The trunk space seemed average. Definitely bigger than my Focus' but a little smaller than I thought it would be due to the car's size. This is because some of the trunk space is used by the car's electric battery and hybrid system. 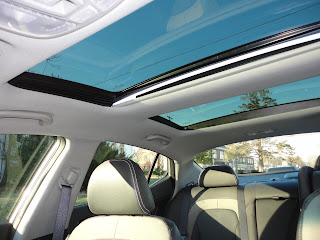 Some other noteworthy features are the steering wheel radio and bluetooth cellphone controls, individually controlled driver/passenger heating and cooling, heated seats AND steering wheel (which warm up quickly) seat position memory (perfect for multiple drivers with different heights) and the panoramic sunroof. Oh, and the glove box can serve as a chilled cooler...how "cool" is that?!

As for the ride, it was definitely unlike any "normal" car. This is a smart car and is constantly changing modes to conserve fuel and energy. There's a lot to explain, but in short, the car can operate in pure electric mode or hybrid mode, which uses the engine and electric motor. Depending on driving conditions, speed, etc., the car knows when to use each mode. I closely watched how the car was running for the first few days, but as the week ended, I was finally able to let the car do it's thing and not worry about whether I was driving efficiently or not.

One thing I did want to know more about though was the battery. I mean, would it run out? Would I have to plug it in or something? I noticed very quickly that the battery was low but the next time I looked, it was almost fully charged. Huh?! Well apparently, it is a self-charging battery and any time the brakes are applied, it charges the battery!

The Kia Optima Hybrid is one of, if not the most, quietest cars I've ever driven. This could be in part because half the time the engine isn't running because it's in electric mode, but honestly, sometimes I didn't even know if the car was on or not! I do want to say though, that when I put on the brakes the car reminded me of a spaceship or something...kind of like a "power down" sound. I'm assuming this was because the brakes charge the battery. It sounded a little weird, but neat at the same time!

I was surprised to find out the Hybrid has a 4-cyl engine; it sounds a LOT more powerful than that when the engine kicks in. With that said, I found the car was a little slow when accelerating from a complete stop when it was in electric only mode. I had to make sure there was plenty of room before I made left turns in front of traffic, otherwise I thought the car wouldn't pick up fast enough and I could get hit on the side. Accelerating while moving though is completely different. It went, and it went fast!

As for fuel economy, the EPA estimates on it are 34/39 miles per gallon. I unfortunately didn't get to take a road trip with this car, but I did drive to and from work everyday in it as well as running around town several times for errands and it only used ONE out of the ten bars. For a week of driving, this seems like great fuel economy! 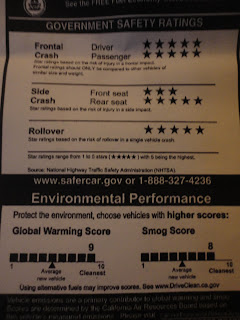 On top of being good on gas, it is also good for the environment. I've never seen Environment Performance ratings this high on a car before. Also, it has outstanding government safety ratings with an almost perfect 5/5 stars.

The Kia Optima Hybrid starts at $25,700. While that is a little out of our price range, I feel it is a good value for the gas conservation alone. It comes standard with many awesome features, but I would recommend many of the optional ones, especially the Infinity sound system.

You can get much more information regarding the way the car works, specifications, pricing and more by visiting the Kia website.
Posted by Kristen at 1:46 PM