2013 Kia Soul Review: Not Just for Kids (or dancing hamsters) 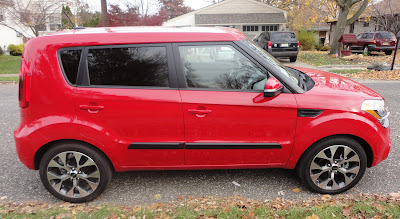 NOTE: All photos can be enlarged by clicking on them. There are lots of details you can't see in the small ones!

I have to be honest, I am not a fan of cars that look like boxes. There's a few out there; I'm sure you know what I'm talking about. The Kia Soul happens to be one of them. I wasn't quite sure what I was expecting from this funky looking car, but it sure exceeded any preconceptions I had for it!

I went outside to greet the gentleman who dropped off the car and we started chatting about the car and its features. I was surprised to find out that the reason behind the whole dancing hamster commercials is due to the fact that the Kia Soul is being marketed to younger drivers and college kids. I didn't know this but once I got in the car, I immediately realized that this car is, indeed, a new driver's dream car (other than a BMW or Ferrari, of course!). But I also saw that it would be a suitable car for anyone, including families like mine. 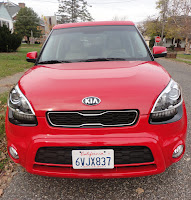 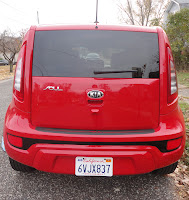 First impressions: It wasn't as boxy as I thought it was going to be. I'm assuming since this is the newest model, it was redesigned slightly. Other than the fact that it was "Look at me!" red, there were quite a few things that caught my eye. First, the 18" tires with alloy wheels were sweet. Second, the stunning LED headlights. Third, the turn signals built into the side-view mirrors. And lastly, the privacy glass (tinted windows). On top of its shape, all these features made this one interesting, yet pretty, car. 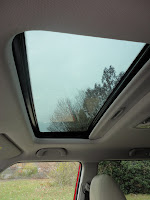 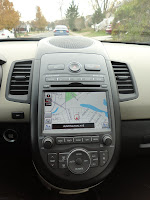 The very first thing I noticed (the second thing was the lovely sunroof!) was the gigantic speaker smack dab in the middle of the dashboard. A quick glance around the car revealed numerous other speakers, two more on the dash, two larger ones on the doors and a few in the rear of the car. The Kia has an amazing sound system! It is by far the best sounding system that comes already installed I've ever heard. If you're an audiophile, this car is for you! I was happy to see that the SiriusXM satellite radio was functional in this car. With that said, I was a little disappointed in the music selection. Don't get me wrong, there were tons of stations I otherwise wouldn't be able to listen to, but I was expecting more. But thanks to the USB ports, I was able to listen to my foreign language and video game music (yep, I listen to that lol) from my iPod crystal clearly. An awesome feature, clearly geared towards the younger crowd, are the speaker lights. The door speakers actually light up in rhythm to the music. There are several different colors to choose from, my favorite being the purple. If this isn't for you or you find it distracting (which I did not), you can turn this feature off. Check out my video below to see them in action!

The seats were an interesting material. It seemed like a mixture of cloth and plastic. It felt weird to me, but I then realized that if I ever had a spill or other mess, it would clean up very easily. This is perfect for families and young drivers, since you know both will be eating and drinking in the car! 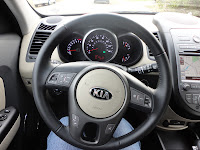 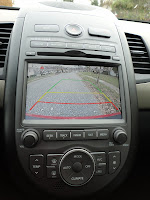 This car also has keyless entry and start, a very welcome feature for busy moms with their hands full! Other awesome features are the built-in GPS system and rear backup camera. I also love that the radio, cruise control and hands-free phone system can all be controlled via the steering wheel. Once you figure out where each button is, you don't even have to take your eyes off the road to do any of those things. This model also had heated front seats. I can't tell you how cozy I was even though it was only 30 degrees outside! I also enjoyed the automatic climate control. I would initially have to turn the heat on high, but it seemed to do its job well once the car got warm inside. 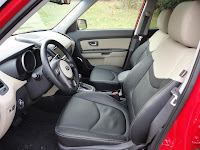 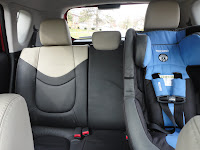 The interior room is great. My hubby is 6'1" and he had no problem with head or leg room. After I put in my son's rather large car seat, there was still plenty of room for my 11-year-old daughter. Since I mentioned car seat, I'm happy to say the Soul comes with a LATCH system. This made car seat swapping quick, easy and safe! 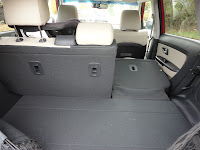 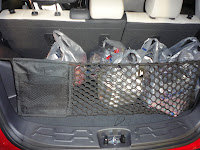 The only gripe I have about size is the trunk space. As expected, it was quite small. I didn't get the chance to load my son's full-size stroller into it, but I think it's safe to say it would be a very snug fit. As you can see though, the seats can be folded down for extra space. Of course, if you have kids in the back seat all the time, this feature is irrelevant. To give an idea of space, I took a photo of my Walmart shopping trip. That's 6 (small) bags of groceries...not much room to spare. The cargo net was a nice addition. I didn't use it for anything, but I'm sure the need would eventually arise and it would be very useful.

This particular model was loaded with fun and optional features, but the outstanding safety features of Kia come standard on all models. There are airbags around the entire car, impact absorbing steering column, side-impact door beams, front and rear crumple zones, electronic stability control and many more.

I've talked about the interior, exterior, fun and safety features. By now you're probably wondering how does it actually drive! In my opinion, the Soul feels and drives like an SUV, something that I really liked. It handled quick turns very well for being a wider car. The ride itself is extremely quiet. Not only was the car noise minimal, so was the outside noise; passing cars for example. The stop to go acceleration was awesome, as was accelerating while driving. I loved how large the viewing area was thanks to the large windshield. One thing I didn't really like was the viewing area from the side. When changing lanes, I like to visually check myself as well as use the mirrors. I found that I couldn't really see if there was a car in my blind spot because of the way the side and rear of the car is designed.

One last thing, the gas mileage. It was pretty decent. I think I was expecting better mileage, but I really can't complain. I got a heck of a lot more out of it than I do with my current car! According to the site, it gets about 23/28 highway miles per gallon.

The Soul has three models: Base, Soul + (plus), and Soul ! (exclaim). The car I tested was almost fully loaded, but the Base has lots of great standard features and starts at a very reasonable $14,400. You can customize with many fun and functional features to meet your needs. Visit the Kia site to get much more information such as pricing and options. You can also build your perfect car there!

I was loaned a 2013 Kia Soul for one week in order to form an opinion and be able to write this review. No other compensation was received, and all thoughts and opinions are 100% my own.
Posted by Kristen at 1:39 AM