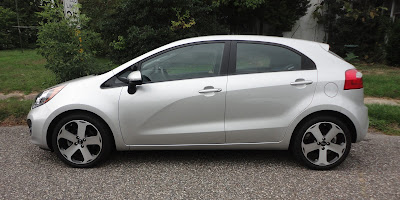 When I was asked if I would like to test drive a Kia Rio, of course I said yes! I don't know much about the brand and we're going to be purchasing a second car in the near future, so this was a great chance for me to "try before I buy".

NOTE: Most photos can be enlarged by clicking on them, allowing to see details. 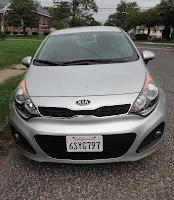 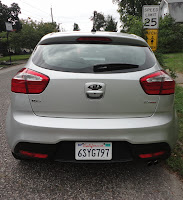 The dealer dropped off a 2012 Kia Rio SX. I was very surprised to see that it was a hatchback. My initial thought (other than how pretty it was!) was that it looked small. I'm 5'2" and I stood a few inches taller than it. I was anxious to open the doors to see if there was enough room to fit me, 6-foot-tall hubby, an eleven-year-old and a toddler car seat. Once I got inside, my worries were gone! I don't know how they did it, but there was a lot of room in this "small" car, especially in the front. The driver's side had plenty of leg room for not only me, but my hubby as well. There was no feeling of being cramped whatsoever. The backseats were a tad smaller, but there was more than enough room for both the car seat and my daughter, with plenty of room separating them. 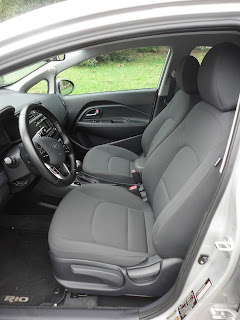 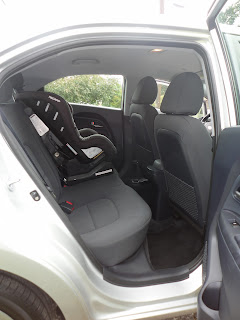 The windshield was big and gave a very good view of the road, and the little windows behind the side-view mirrors "opened up" the car even more. The 17" alloy wheels looked great and gives a nice sporty look. The trunk was quite big and you could easily fit many grocery bags in it. However, my full-sized stroller took up more than half of the space, as you can see in the photo. With that said, the back seats can be fully reclined and the entire back half of the car can become a massive storage area when needed. 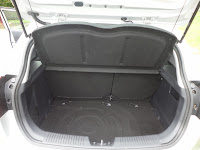 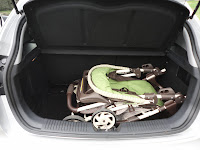 The dashboard is very user-friendly (and good looking!). Everything is pretty much in one spot and you can easily see all the important info (mileage, gas, mph, etc) at a glance. One of my favorite features is the steering wheel radio controls. Many years ago, I actually rear-ended somebody because I was fiddling around with the radio. With this set-up, you don't have to take your eyes off the road in order to change the channel, volume or mode. The cruise control is located on the wheel as well. You can also control a hands-free phone system via the steering wheel, but I wasn't able to use this due to my lack of smartphone :( You'll also find several USB and auxiliary inputs so you can hook up and play your MP3 player via the stereo, or to charge any of your electronic devices (cell phone, tablet, etc). Great for long-distance driving! I liked the little storage spot in the dash, to the right of the radio. It is covered in a textured rubber so whatever you put in there (cell phone, glasses, etc), stays put. 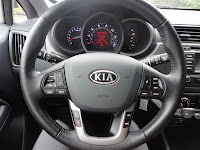 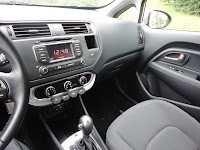 A very nifty feature I want to point out is the reverse camera. This is the first time I've driven a car with this feature, and at first it was a little weird using it (I kept using the mirror), but I noticed that it works wonders in parking lots. It has a peripheral vision of sorts and allows you to see around the cars that are parked next to you, letting you see if any cars (or carts!) are about to drive past you. I also loved the color coded distance meter. With its green, yellow and red areas, you can easily tell how far or close you are from say, another car. It automatically turns on when the car is put into reverse and switches back to the time/radio screen when in drive. 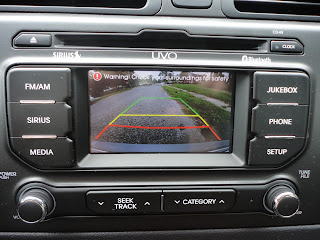 Speaking of safety features, I want to mention that the Kia Rio is decked out in airbags. It has dual front advanced airbags, front seat mounted side airbags and full length side curtain airbags. Also included is a LATCH system for car seats, and anti-lock brakes, as well as traction and electronic stability controls.

By now, you're probably wondering how it actually drives. Well, thanks to its electric power steering and sport-tuned suspension, it drives like a dream! It handled very well on quick turns and steering in general was great. The driving itself was super smooth and pretty quiet, especially when on the highway.

As for fuel efficiency, the Rio has EPA fuel economy estimates of 30/40 MPGs. It has an 11.4 gallon fuel tank. When I received the car, the tank was a little less than full and when they picked it up, it had a little less than 1/4 left. I put almost 275 miles on it (half highway, half city), so I would say you could get around 300 miles per tank of gas. I don't know how great that is, but with my usual driving schedule, that would last me about 2 weeks!

The Kia Rio comes in three different trims (EX, LX, SX) and prices start at just $13,800. As stated, I received the SX and with the features equipped, has an MSRP of $18,545. A lot of great features come standard on all trims, but you can also add optional ones if you like, allowing you to create a car that fits your needs and desires, at a price you can afford. You can get many more details on specs, features and pricing at the Kia site.

In closing, I have to say that I was quite impressed with the Rio. There's nothing too fancy about it, but it has many features that make it perfect for families and first-time drivers alike. I believe this car is competitively priced and comes with a lot of features that make it worth it. Between the safety and fun features, I think it's an overall great car and will definitely consider it for when we're ready to buy our second car!

I was loaned a 2012 Kia Rio for one week in order to form an opinion and be able to write this review. No other compensation was received, and all thoughts and opinions are 100% my own.
Posted by Kristen at 2:42 PM

I'm NORMALLY not a hatchback fan... but I JUST FELL IN LOVE! Oh my gosh! The Kia Rio SX looks amazing! I think I need to test drive soon!

Super cute car...I have the Sorento and LOVE it. Thanks for the in depth review.

Cute! Love the camera, that's a nice touch :) I'm more of an SUV girl, but this looks like an awesome car.