Moms, I'm sure this sounds familiar: Your child begs for a toy or stuffed animal, you finally cave in and get it, only to have them completely ignore it after a week of non-stop play. They just get bored with them!

Enter You fill in the blankZ, a toy that is almost impossible to get bored with! The blankZ are blank stuffed animals that your child can design themselves with markers, play with them for as little as long as they want, and then pop it in the washer and dryer to start all over again with a new look and personality!

Each blankZ comes with 5 non-toxic, washable watercolor markers and a blankZdrop, a large blank card that your child can design to create a "living environment". Each toy also comes with its own removable hangtag with a poem that describes the character.

There are currently seven different characters: bear, bull, pig, elephant, dog, rabbit and seal. Each toy costs $13.99 and can be purchased here.


REVIEW
I was given the opportunity to receive a blankZ of my own (well, my daughter!) to review. I almost didn't get the chance to take a picture of it in its box because my daughter immediately wanted to open it! It came in a nice, easy-to-open package. After getting it out, she enjoyed reading the little poem about her new toy. 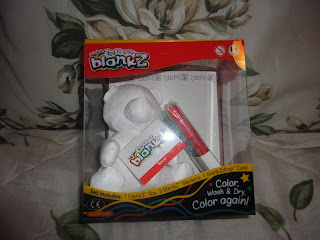 She had no problem deciding how she wanted her bear to look. She had it colored in just a few minutes! The on thing we noticed though is that the markers would get on her fingers and had accidentally left fingerprints on a few spots on the bear. My advice would be to make sure the markers are dry before touching. It doesn't take long to dry at all. The second time she colored it, she didn't have any of these stray marks and her fingers didn't turn color! (not a big deal though, since they're washable it came right off) 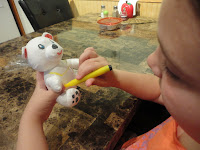 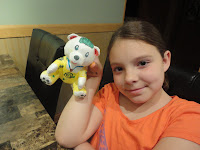 When she was done, I asked her if she wanted to wash it and color it again. With no hesitation, she said, "Yes! I want to turn it into a pirate!". She didn't believe it would come out white, and to be honest, I was a little skeptical too. She really went to town on it with the markers! I was also a little hesitant throwing it in with my clothes, afraid that maybe the markers would bleed onto my clothes. But, I took the product's word and threw it in with my wash. I used my normal wash and dry cycles. As you can see in the photo below, it came out of the dryer completely blank again! 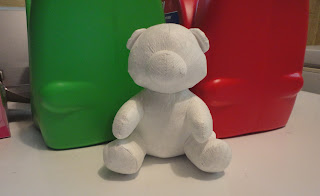 My daughter was super happy...she ran right upstairs with it and created her pirate bear. She's had the pirate bear in her room for about a week now and isn't ready to wash it...she said it's too pretty too! But I'm sure sooner or later, she will get bored with it and want to turn it into a princess or something!
GIVEAWAY
You fill in the blankZ would love to give one of my readers the chance to own one of these guys of their own! Giveaway ends at 12:01 EST on 7/5/12. GOOD LUCK!
a Rafflecopter giveaway

These are so cool!! My daughter would LOVE this! She is four and loves to draw, color and paint. Thank you for the awesome review and giveaway! Good Luck to everyone!!