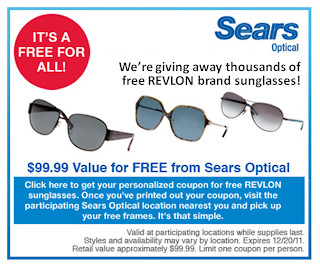 Head on over to Sears Optical's Facebook page to get a printable coupon good for a FREE pair of Revlon sunglasses!

NOTE: There is some controversy over this, but the coupon is found on their OFFICIAL Facebook page, and several bloggers I know called and said it was legit.

Also, WT247 fan Britney reported: I called Sears Optical to make sure this couPON was a go, the optical center had never heard of it, but said there was no reason why it would not work; except, for some sears being franchises and some not being part of the corperate ladder. So in some cases some of the Sears stores may take them and some may not it is at their discretion!

UPDATE: Fan Britney just got back from Sears Optical and this is what she had to say:
I just went and the coupon worked fine! Everyone was super sweet at Sears Optical!!! I got a pair and my hubby got a pair for his mom! Thanks ♥ I was super excited when we walked in and the associate said she had gotten a heads up about the free sunglasses yesterday YAH!!!
Posted by Kristen at 4:57 PM